Some people may have read my post yesterday and thought I was defending the race organisers of the cancelled Reading Half Marathon. To some extent, I was doing that –  because I do not think it is their fault that we were hit so badly with the snow.

However, as time goes on and they still haven’t put any new information up on their website, I am feeling less and less sympathy for them. People were able to collect race packs from the venue yesterday but again, this was only for a limited time and wasn’t communicated out very well. (I could have driven over but decided it wasn’t worth my time to collect a medal and finishers T-shirt for a race I didn’t finish. The medal needs to represent an achievement, really; otherwise it just becomes a piece of kitsch.)

It doesn’t look likely that there will be any refunds or that the race will be reorganised. I sincerely doubt that there will be free entries offered for next year either. Another, smaller, event was cancelled on the same day and it was said that it would bankrupt the organisers to issue refunds after all the money spent. (Which does make you wonder whether these events get insurance.)

However, I suspect that none of the above considerations are going to stop the participation numbers from dropping next year. It seems that most people aren’t angry at the cancellation but at the lacklustre response. The weather forecast was in place from Monday last week and there should have been time to plan out a goodwill gesture or something, rather than the sponsors having to step in (Sports Direct are offering £40 vouchers to all would-be participants).

This is a shame, because it will damage an event that I really like, on top of the disappointment of not being able to run in it yesterday.

My brother came from London to support myself and my running buddy so we played Mario Kart yesterday instead. Whilst I was talking with Running Buddy, I mentioned a specific pain I had been feeling below my left knee and he said that was a classic warning sign of runner’s knee. I said I had been resting up for my taper since last week’s ten miler on Sunday but he said I should rest some more.

So, who knows? Given that I would have been swept up in the atmosphere yesterday, I would have run hard, and maybe damaged it further. Maybe I’ve sidestepped an injury!

I am not detracting from anyone else’s disappointment or feeling that they were ripped off yesterday. I am just trying to keep myself positive by believing that some good may have come out of it for me personally.

In the meantime, this is me in my 2017 finisher’s T-shirt (notice how the sun is shining brightly now that we’re back into the working week!) 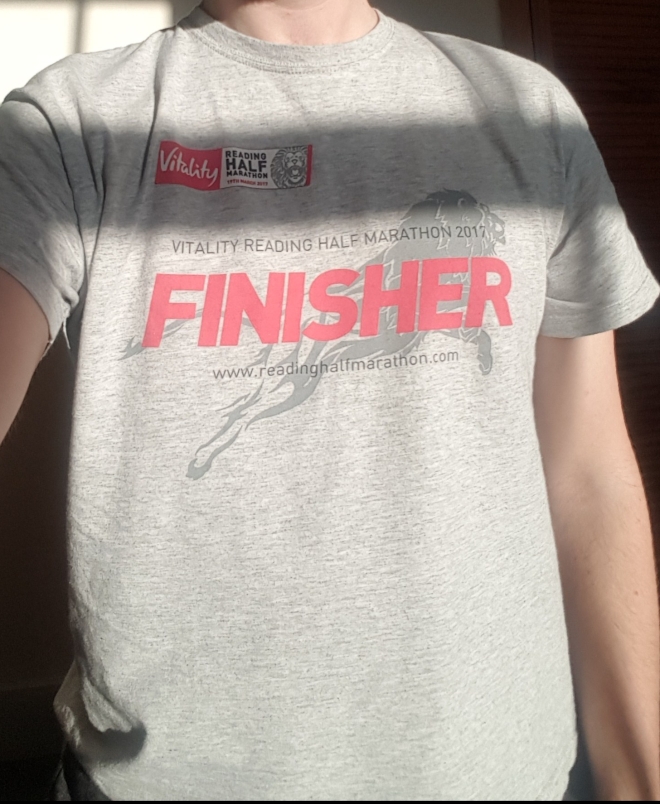 I love running, but don't always train in the way that I should. I started my blog in between my first successful completion of a marathon (although I wrote the first post a few days prior to that) and my first ultra marathon, which was the first half of the 100k "Race to the Stones". Maybe part of my reason was to publicly call myself out on my own stated goals. I chose the name "half arsed runner" because I wanted to show that my motivation levels are far from perfect, and that it's OK to be human. View all posts by halfarsedrunner

One thought on “Silver Linings”