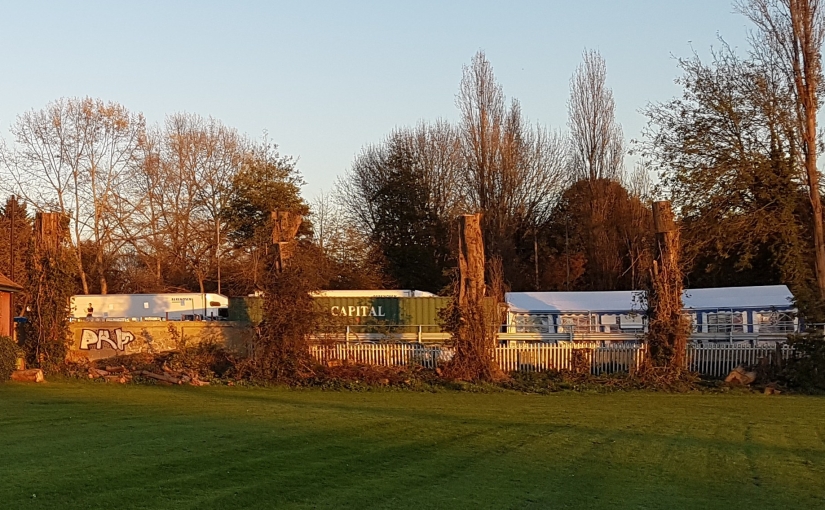 I need to start this with a shout-out to my bro.

This isn’t the first virtual race that Zombies, Run! have done but I have always hesitated before to spend the money on one as it is expensive to enter, even when compared to real-world races. That said, I do like ZR and I wanted to give it a go.

I think my brother could sense that and knew I would never buy an entry for myself – so he got it for me as a gift. Kudos! 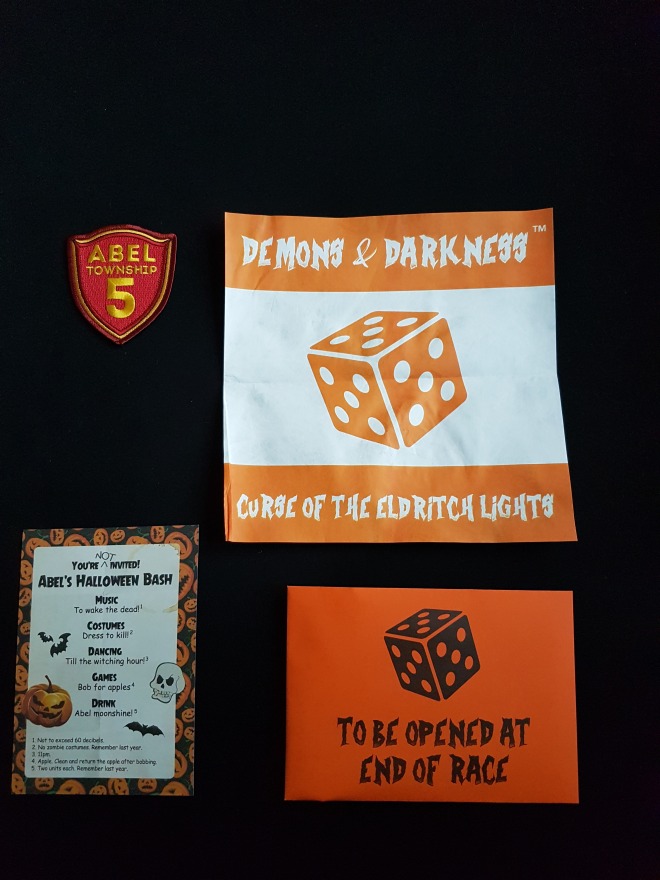 And here’s what I unlocked in the app itself (you get both the 5k and the 10k, but also two bonus stories for Halloween):

Admittedly, this does differ from other race events in the sense that you are very much in your own little world. You don’t get the support from marshals or by-standers, or the opportunity to meet other runners. You don’t get water stands either, although for a 5k or a 10k, they’re not as necessary.

Another thing you don’t get is the general sense of occasion. You have to make that yourself. Nevertheless, you are racing on your own terms, at a time of your choosing.

Opting for the 10k version first, I set out on a gorgeous Autumn evening, the time of day when the setting sun casts long shadows: 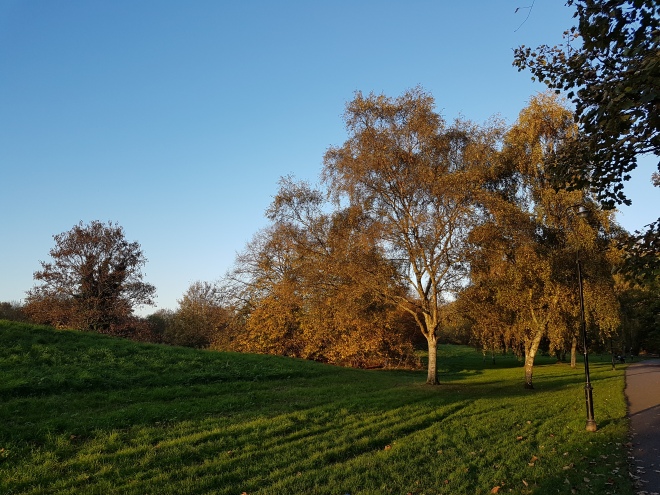 But as it got darker, around about the 4k mark, the story started to draw me in. There was a sudden scream in my headphones that really made me jump!

To quote Negan from The Walking Dead, it started to get “creepy as shit”. If you can choose your music to complement an eerie or sinister mood, all the better. I recommend listening to a band like Mogwai, Explosions In The Sky or God Is An Astronaut if you really want to go for the full-on soundscape to enhance the “mission”.

The narrative was played out in fine ZR form, engaging and entertaining, with strong characterisation, and a plethora of pop-culture references to be had – as always, ZR never takes itself too seriously. (There was even something a bit Dr Who about it.)

On reflection, starting out at 5pm may not have been the best idea though, as it was busy in the park and I did miss parts of the dialogue. All I wanted to do was populate the landscape with the constructions of my own imagination, but the outside world has a way of interfering.

Thanks a lot traffic lights!

Stop laughing so loudly little kid – the Zombie apocalypse really isn’t the time to be enjoying the park with your family!

This morning I saw an email directing me towards the worldwide leader board, which was exciting. Apparently 398 people have run the 10k race so far, with the 5k being much more popular. Anyway, I am currently ranked 150th under the username Cornetto (after Shaun Of The Dead). There have been 1266 runners doing the 5k.

I joined them this morning, setting out early after the clocks went back in the UK. This time it was a lot quieter, but with the same gorgeous low sun, this time rising rather than setting: 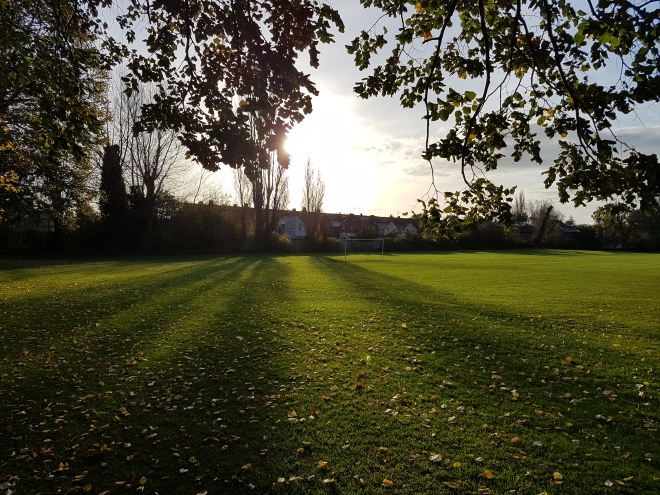 This meant that I heard all of the dialogue. (I don’t think the 10k has any extra dialogue, but it’s more spread out.)

And here is my medal (which was in the envelope marked “to be opened at end of race” of course): 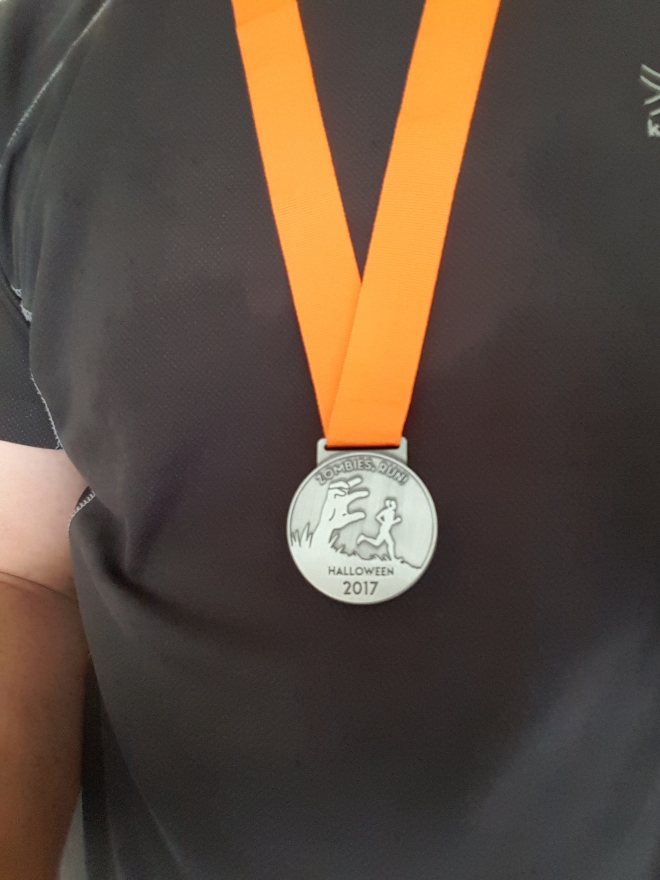 And yes, those are massive sweat patches – this is a genuine post-race selfie!

Anyway, moving on, here are some fun stats from the leader board:

In conclusion, virtual runs cannot replace real events, but they could certainly provide an entry point for people who are not yet ready to run in front of a crowd. This one certainly had its own pluses, and it got me putting in an effort to get the fastest time I could.

I love running, but don't always train in the way that I should. I started my blog in between my first successful completion of a marathon (although I wrote the first post a few days prior to that) and my first ultra marathon, which was the first half of the 100k "Race to the Stones". Maybe part of my reason was to publicly call myself out on my own stated goals. I chose the name "half arsed runner" because I wanted to show that my motivation levels are far from perfect, and that it's OK to be human. View all posts by halfarsedrunner